Apigee Edge is an easy-to-use but powerful API administration platform with capabilities including analytics and operational automation, as well as API developer management. Edge provides an abstraction or facade for your backend service APIs by fronting them with a proxy layer, which provides security, rate limiting, quotas, analytics, and more. The platform provides secure access to your services via a well-defined API that is uniform across all of your services, regardless of how they are implemented.

In this article, we will take a look at the different ways of exposing an AWS Lambda function as an API to consumers using Apigee Edge as a proxy or passthrough.
There are different Apigee products available and so wherever Apigee is mentioned in this article, it refers to Apigee Edge for Public Cloud (https://docs.apigee.com/api-platform/get-started/get-started ).

WHAT ARE THE DIFFERENT TERMS USED IN CONTEXT WITH APIGEE?

API Proxy: A core entity in Apigee that functions as a facade for APIs. An API proxy comprises a collection of configuration files, policies, and code.

API Consumer: System that uses the APIs exposed by the API Provider

Policy: XML configurations that can be used within an API proxy to perform various actions when the API is being invoked (rate limiting, request manipulation, etc)

ProxyEndpoint: Defines the URL of the API Proxy on Apigee

TargetEndpoint: Defines the URL of the backend service to which requests have to be routed.

Reverse Proxy: A type of API Proxy that routes inbound traffic to a backend service.

No Target Proxy: A type of API Proxy that does not have a defined target.

Hosted Target Proxy: A type of API Proxy that routes traffic to a Node.js application deployed in Apigee.

WHAT IS AN API PROXY AND HOW DOES IT WORK?

The most important entity within Apigee is the API proxy. To understand how a proxy flow works, it is imperative to get an understanding of how an API proxy is created and what happens when a consumer invokes an Apigee endpoint.

An API proxy configuration comprises two definitions, ProxyEndpoint and TargetEndpoint. Consider these to be XML files with a series of steps about what needs to happen when an Apigee proxy URL is invoked. Whenever a proxy is created using Apigee Edge UI, the proxy creation wizard creates a default template using the details entered by the user.

You can follow the steps mentioned in https://docs.apigee.com/api-platform/fundamentals/build-simple-api-proxy to create a proxy using the UI.

Below is an example of a simple proxy that returns the IP addresses of the Apigee-hosted machine(s). 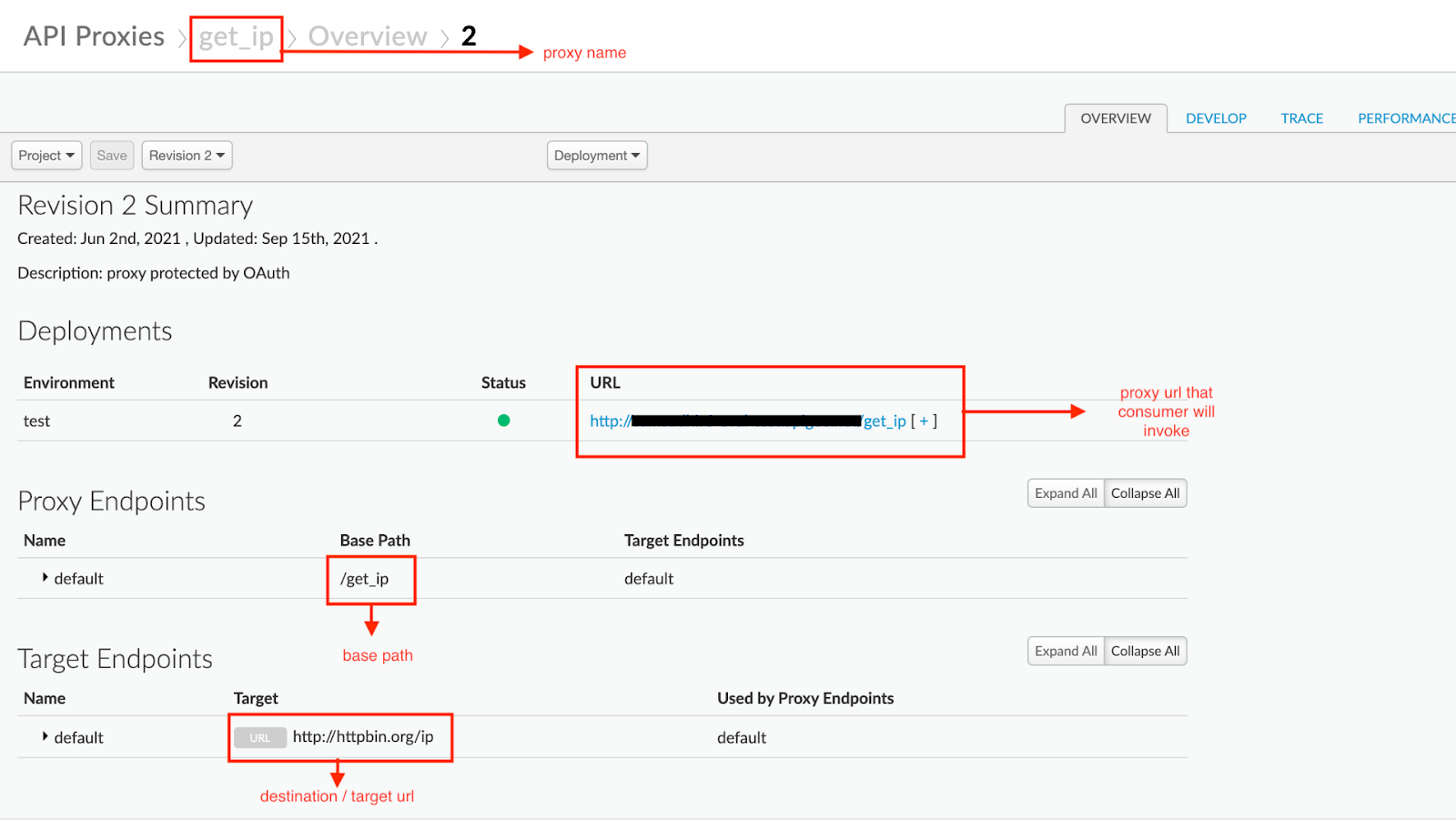 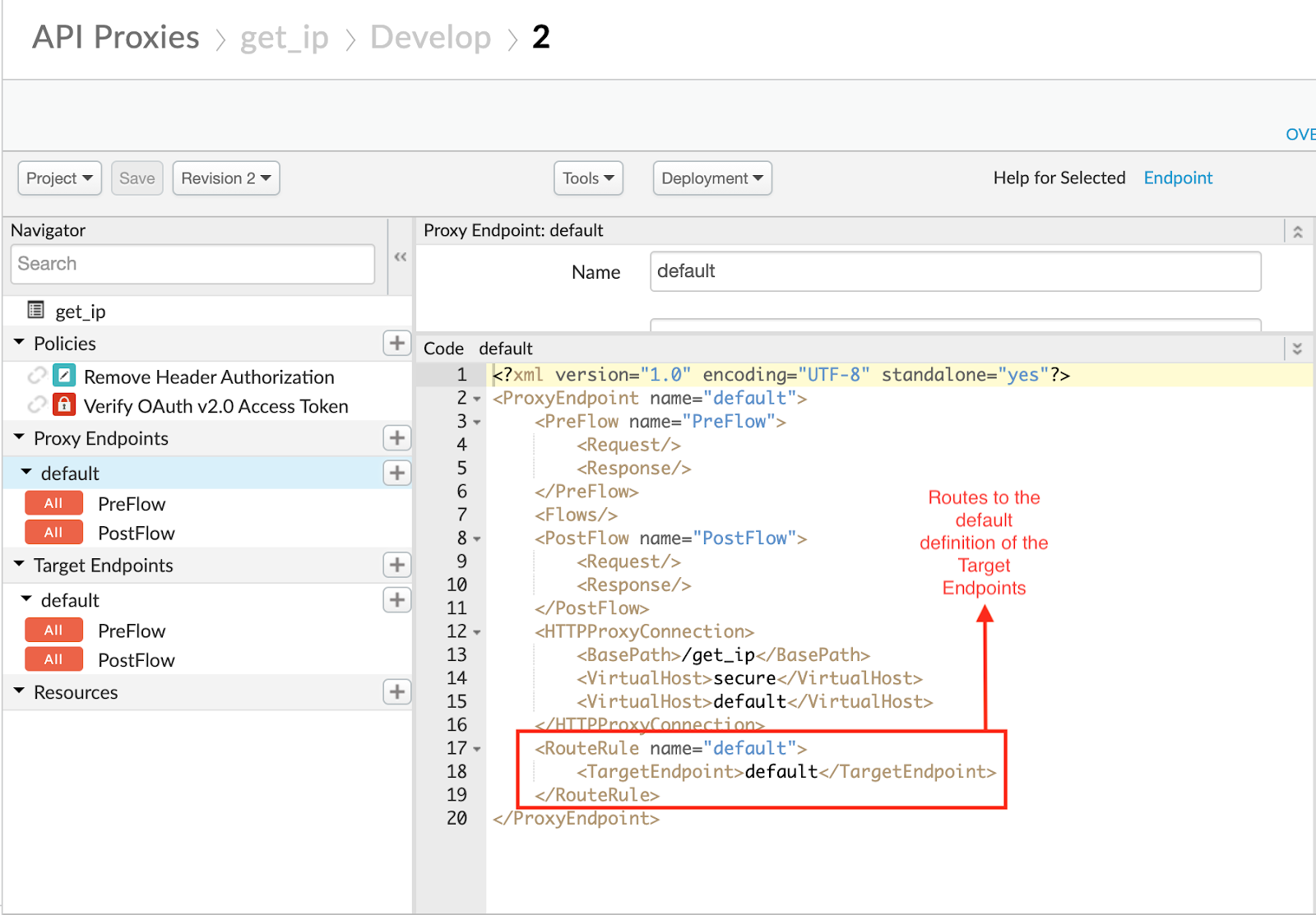 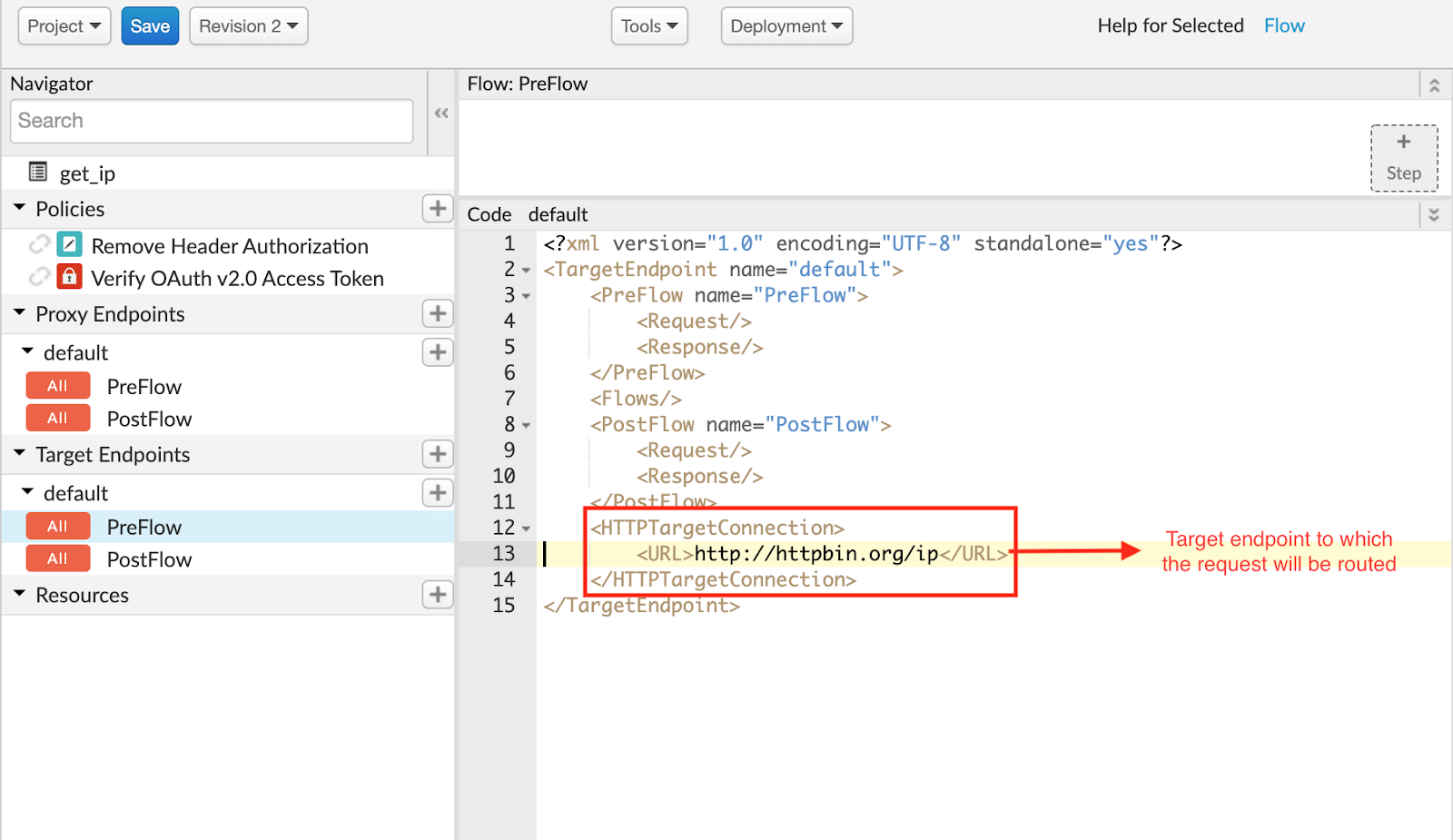 Before going into the different integration patterns, we should ensure that we have the following prerequisites covered.

The simplest, yet most expensive approach when it comes to invoking a Lambda function via Apigee is to use an AWS Application Load Balancer as the target for a proxy. The target group for the Application Load Balancer should be the Lambda function. The Load balancer can be exposed using either the DNS name or a route53 alias. This value can be used as the target endpoint while creating a “reverse proxy” on Apigee. Once the proxy has been created, the configuration would look like something shown below. 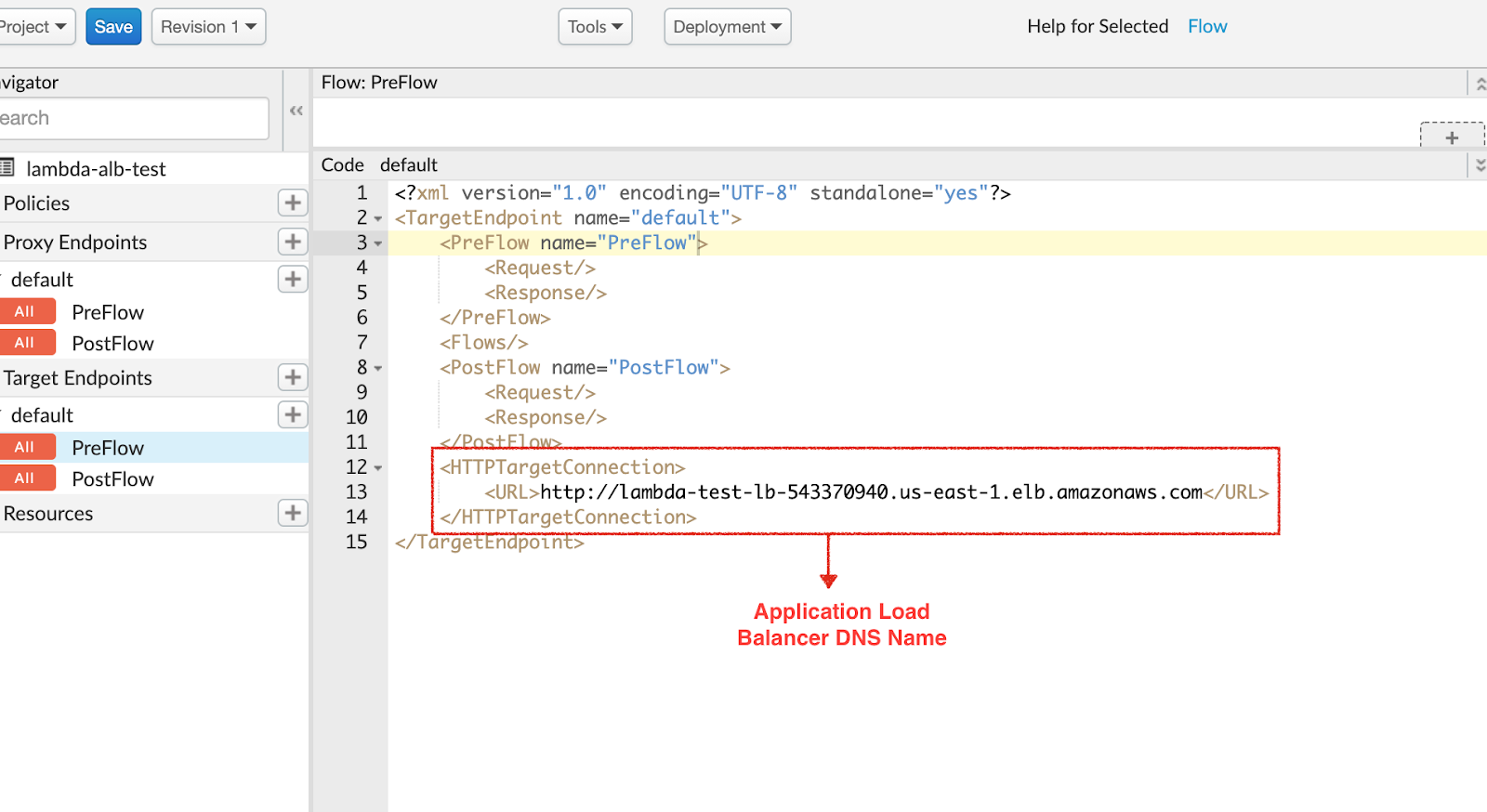 This approach may not be feasible if cost is a deciding factor. However, if you don’t mind the cost, then this would be a good pattern to adopt. There is also the flexibility to customise request headers (for e.g _X_AMZN_TRACE_ID) since the request will be routed through the load balancer.

Hosted Targets provide the flexibility to run a Node.js application within a runtime environment hosted by Apigee and expose it as a secured API. Usually, a “target” in Apigee is a backend system that is accessible via HTTPS. In the case of hosted targets, the “target” is a Node.js script which sits within an API proxy.

Getting an Edge API proxy to talk to a properly built and deployed Hosted Targets application requires a simple configuration in the proxy’s Target Endpoint. The Node.js script can make use of the in-built node modules as well as external packages (express for example). In our case, the Node.js script will utilise the aws-sdk module to invoke the lambda function.

Now, we need to use AWS access keys (access key Id and secret access key) to access AWS resources programmatically. Here comes the question of how best we manage the credentials. This is where Apigee Key Value Maps (KVM) come into picture.

A KVM is a collection of key/value pairs that are either stored as plain-text or encrypted strings. Creating a KVM is quite easy as shown in the video below.

You can also refer to https://docs.apigee.com/api-platform/cache/creating-and-editing-environment-keyvalue-maps for in-depth information on KVMs

To get started, we first create a KVM as shown above and then a ”Hosted Target” proxy via the Apigee Edge UI. The proxy creation wizard creates a default template along with three files (app.yaml, index.js and package.json) that are required to deploy a Node.js application. The files can be modified with the below content

Once the KVM and proxy are created, this is how the configuration will look like on the Apigee Edge console 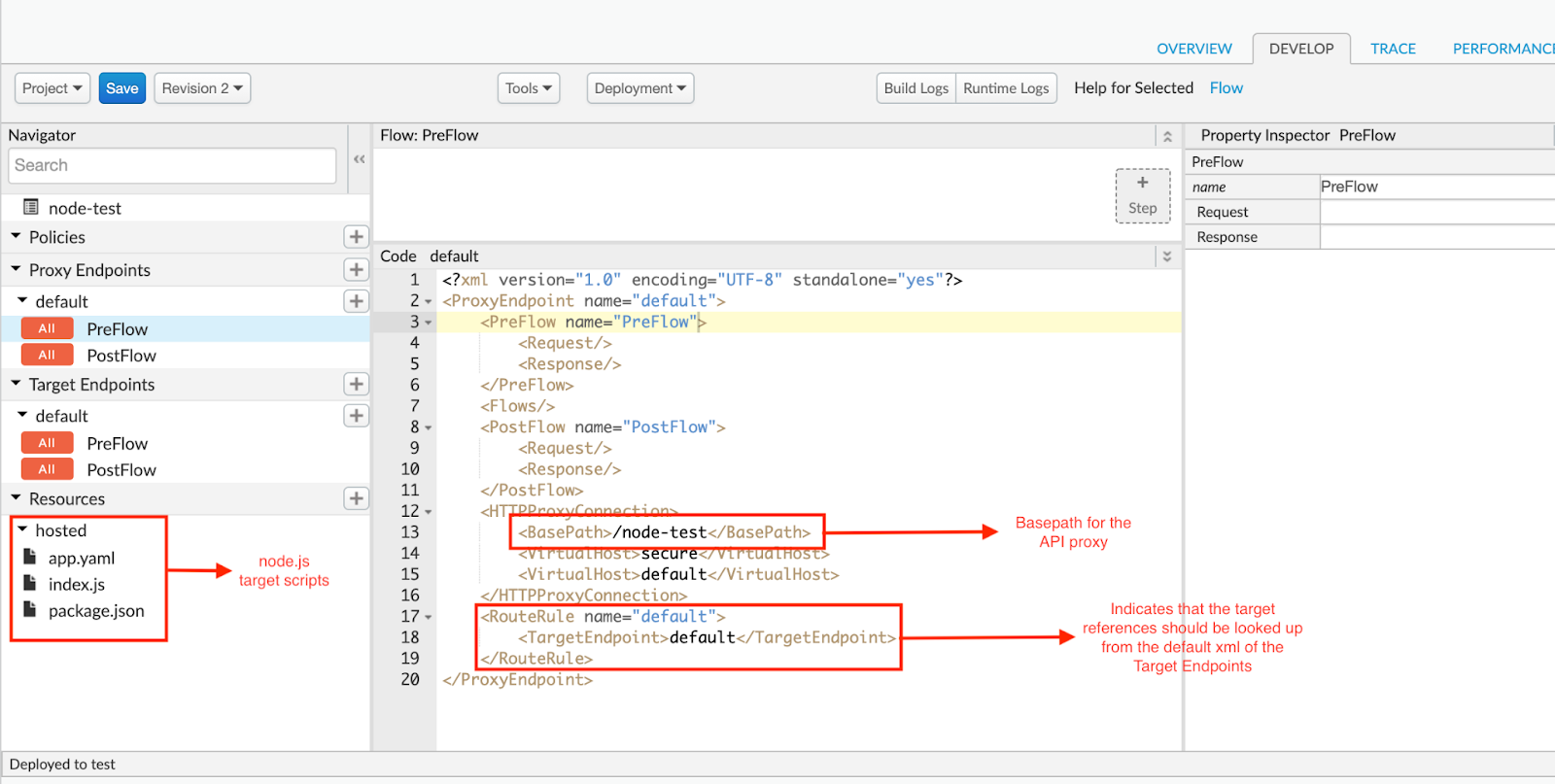 This approach can be used if you want more control over the lambda execution flow and to perform pre and post processing of the request and response without using too many Apigee policies. However, do bear in mind that deployment of Node.js hosted targets takes a while and this depends on the size of the package. Moreover, there are also restrictions on the number of hosted targets that can be deployed in an Apigee organisation.

The most recommended method to invoke a Lambda function is to make use of Apigee’s AWS Lambda Extension. The extension is intended to streamline the process of interacting with a lambda function, thereby eliminating the hassle of creating and maintaining code scripts and KVMs. All the heavy lifting is done by the extension itself and all one has to do is just install and deploy the extension to an Apigee environment. The deployed extensions are utilised within a proxy using a Service Callout Policy.

Installing and deploying an extension to multiple environments is a straightforward process and can be easily done by following the steps provided in the Apigee Edge documentation.

Once the extension is installed and deployed, we can go ahead and create the API proxy. In this case, we can create an Apigee “no-target” proxy. The reason behind this is because normally an extension callout or service callout is used to invoke an external service and perform some action before the request is routed to a target endpoint (for example. upload some data to S3 or logging to datadog before hitting the target API). However, in our case, the target is a Lambda function and Apigee does not allow a Lambda function name or ARN to be specified as the target endpoint. So, a few tweaks will have to be made to return the response from the lambda function back to the API consumer.

To achieve this integration, Apigee policies can be added to the proxy after it is created.

An Apigee policy to perform a callout to an external service. In our case, the policy is used to perform an invoke action on the lambda function using the lambda extension.

A policy to parse the response from the lambda function. The response from a lambda is in a stringified format and needs to be parsed to get a well-formatted JSON string. The reason this is being done is because we want to extract certain attributes from the response.

Consider that the lambda function returns the following response

What we want to do here is parse the response, extract the value of the ‘status‘ attribute and set it into an Apigee context variable. This context variable can now be used in other policies in the same flow. The entire parsed response can also be set in another context variable.

This is how the configuration will look like on the Apigee Edge UI after the proxy is created and new policies are added.

Invoking this proxy endpoint will result in all these policies being executed and will return a well formatted response and a HTTP 201 response code.

As mentioned above, this is the preferred approach at the moment as it does not involve writing and maintaining code snippets. The extension can also be reused by any proxy that requires this functionality thus reducing the need to maintain the Lambda invocation logic within individual proxies.

Now that you have a basic understanding of the different ways to expose a Lambda function via Apigee Edge, you may want to think about which option fits your use case. This has to be done after considering the factors such as cost, ease of use and maintenance. I would personally recommend using the Lambda Extension approach because most of the work involved with the credential management and resource invocation is already handled and is abstracted from us.

If you want to learn more about Apigee Edge, check out the links and Youtube channel below.